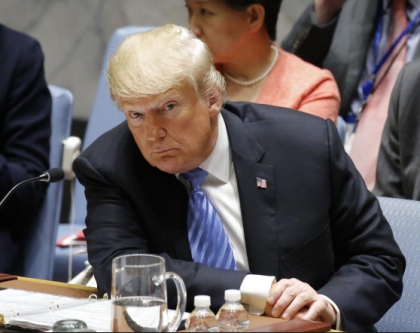 You spoke to the world’s leaders [1] and asked them to evaluate your career, to see the progress you had made till now, “to achieve a brighter future for all of humanity” [2] I have some comments on your practice during the Two years.

The “brighter future for all humanity”, what a holy purpose, you mentioned as your priority as American’s president’s task.

I can say well down in choosing such a best dream to achieve. But let me calculate what progress you've made, and who was your allies in this process, and also describe their performance in this regards, in our region, the Middle East, the paradise of dictatorships and bloodshed.

The Arab Springe Movement put our region in instability and uncompleted pro-democracy forces’ task, to realize their target, but you didn’t help them in this respect, and even you choose your allies from the most dictatorship system among, like the Saudi Arabian monarchies, who have been imprisoned their people for long time, the rulers who take hostage Saudi’s people as well as their properties and freedom, and even the name of the country, which is not belong to the people, and refer to belonging this country to a family members who take under arrest all. And unfortunately you had “sword dance” with them.

Yes, you have chosen one of the worsted dictators as a key allies in this regime to mobilize your brightness! to bring “brighter future” in the Persian Gulf, and other Arabian countries?! And I want to ask you which brighter future can you bring with such backwardness?!

So under your priority in this region, Yemenis are under unhuman-coldhearted, surround, sanctions and bombardment by your key allies in Saudi Arabia and UAE... for years.

About Syria you put all your efforts to save ISIS… by put under pressure the countries who fight with them, and instead, support the countries which help ISIS… logistically, ideologically… in this “very brutal civil war.”

And now about Iranian, under your international law breaking decision, and withdrawal of The Joint Comprehensive Plan of Action, my people are going to be poorer than before, and you speak of brightness for us?!!. You provide a condition again; which Iranian being looted by opportunists during sanction period.

It is a historical fact that American and foreign interfere in the following of freedom and democracy by Iranian, always were like a poison and disaster for us, as history of our long struggle shows. Yes at the time that your people are going to be wealthier [3] we are going to be poorer under your policy.

Iranian are losing their jobs as you are improving your economy.[4] You are making walls to save himself, and we are living in the area which is haven of terrorist groups which are supporting by you and your allies.[5]

You want to limited our defense capability in this fearful region, when your “military will soon be more powerful than it has ever been before.” [6]

Yes Mr. Trump! You “are standing up for America and for the American people” to make the United States “stronger, safer, and a richer country than it was.” But under your policy the Iranian, Syrian, Yemeni… are sinking in troubles, and at the same time you are speaking of the “brighter future for all humanity” we are not belonging to this all humanity?

Please ask your administration to calculate how much brightness come to the Middle East during this two years, when you come to power in US. America. Which problem is solved toward Iranian, as you announce “we are also standing up for the world.”

We can see your “incredible change” during this two years, that our people economy is going to be worse than before, your “hostages have been released” but the Middle East Nations are going to be hostage by your allies, stronger then before, by selling or gifting more “military facilities” by you to dictator regimes like Saudi Arabia and apartheid regime like Israel.

“The sanctions will stay in place until denuclearization occurs” just for the country who are not your allied, and Israel, Saudi Arabia… can have every “military facilities” because they are in your line.

When “the United States is working with the Gulf Cooperation Council, Jordan, and Egypt to establish a regional strategic alliance” so how the Middle East nations can be released of their dictatorship systems which are hand to hand with you for a “regional strategic alliance”? You are saying about “prosperity, stability, and security across” the region, how it can be possible when you forgot human values like freedom, democracy and said “Ultimately, it is up to the nations of the region to decide what kind of future they want for themselves and their children” how can be the nations to decide to change?

You are “pleased to report that the bloodthirsty killers known as ISIS have been driven out from the territory they once held in Iraq and Syria.” But my question is, who stand with the Syrian people and their sovereign government to driven them out? Saudi Arabia, UAE, Qatar… or Iran...

You “will continue to work with friends and allies to deny radical Islamic terrorists any funding, territory or support, or any means of infiltrating” your borders. Yes, you are very active, but the supporter of “the radical Islamic terrorists” are your allies, all in the world knows who support ISIS… in Syria, Iraq, Pakistan, Yemen, Libya, Nigeria…  logistically and ideologically.

Mr. president! Dear Mr. Trump!  this is a very good idea “to help people build more hopeful futures in their home countries. Make their countries great again”. But in all my Iranian contemporary history, foreign interfere didn’t let my people to reach to their main goal (freedom and democracy), the last one was coup against prime minster Mr. Mohammad Mosaddegh, who was collapsed by American agents…

At the time that you are looking for countries who have your “interests at heart” [7] to give them help and support, how a “brighter future for all of humanity” can be appear for all. This level of American Nationalism cannot fallow world human interests. It is very good for American interests just, not humanity.

Yes Mr. president! “It is the question of what kind of world will we leave for our children and what kind of nations they will inherit.” Actually under such a level of nationalism, and ambitions of world leaders and their allies, which form of brighter future, can be reach?! under this collective allied, it is very clear, unfortunately which future will be form.

Yes, you are right Mr. Trump, “There is India, a free society over a billion people, successfully lifting countless millions out of poverty and into the middle class.” But they are free of foreign interfere, coup… they have Ballistic missile to protect himself, long range missile to reach them to space, nuclear capabilities to confront with nuclear armed neighbors, no sanctions and no discrimination, and since Mr. Gandhi achieve democracy, pluralism, secularism… nobody try to arrange a coup against their government. Is it possible for us also to don’t be your allies, and follow our dreams without foreign interferes, which put my people in prosperity and freedom without disaster and hardness?

Yes Mr. Trump “There is Israel, proudly celebrating its 70th anniversary as a thriving democracy in the Holy Land.” But my question is about Palestinian what is going on for them, are them also as nation in your mind?!

When you are proud of your friends and key allies, like “King Salman and the Crown Prince” who are in sword dancing with you, are you thinking of life Brightness of millions Yemenis who are under cruel unhuman-coldhearted, surround, sanctions and bombardment by this like of Crown Prince?

Yes Mr. Trump you are in America, believe “in the majesty of freedom and the dignity of the individual.” But Iranian and other sanctioned nations, how can save their dignity. How can you say “We believe in … the rule of law” when you break and out so many international law, because of see them not in line of your interests?

Yes Mr. Trump, you are completely right that “Sovereign and independent nations are the only vehicle where freedom has ever survived, democracy has ever endured, or peace has ever prospered.” But under your cruel sanction on my people how “we must protect our sovereignty and our cherished independence above all.” How it possible.

Your radical emphases on American nationalism, cannot let you to be “together” with others to “choose a future of patriotism, prosperity, and pride” and follow “peace and freedom over domination and defeat” and really “God bless the nations of the world” in front of such selfishness in some world leaders.

Thanks to hear me.

[2] - “One year ago, I stood before you for the first time in this grand hall. I addressed the threats facing our world, and I presented a vision to achieve a brighter future for all of humanity. Today, I stand before the United Nations General Assembly to share the extraordinary progress we've made.”

[3] - “America's economy is booming like never before. Since my election, we've added $10 trillion in wealth.”

[4] - “The stock market is at an all-time high in history, and jobless claims are at a 50-year low. African American, Hispanic American, and Asian American unemployment have all achieved their lowest levels ever recorded. We've added more than 4 million new jobs, including half a million manufacturing jobs.”

[5] -" We've started the construction of a major border wall, and we have greatly strengthened border security."

[6] - “Our military will soon be more powerful than it has ever been before.”

[7] - “We will examine … whether the countries who receive our dollars and our protection also have our interests at heart. we are only going to give foreign aid to those who respect us and, frankly, are our friends”