human concern over controlling Power-holder and power as most dangerous phenomenon for humanity Rightly, and the most corrupt-maker element in the mankind history, lead men to taste deferent kind of ruling society system, and based on this philosophy wised Indian revolutionary leaders has chosen federal system as most effective structure to make them able to came over their challenges after independent from British ruler in 1947, so new India that contain vast diversity, is shaped geo-politically by states and some independents territories based on federalism, and power that was shared in National, state and local level and politically within dependent Executive, legislative and judiciary level with powerful-direct elected parliament.

Indian revolutionary activists were aware of power and power-holder potential problems and if power gathers in the hand of one person, a group or class, the disaster that will happen ultimately, thus they try to regulate ruling system well by choosing federal system. 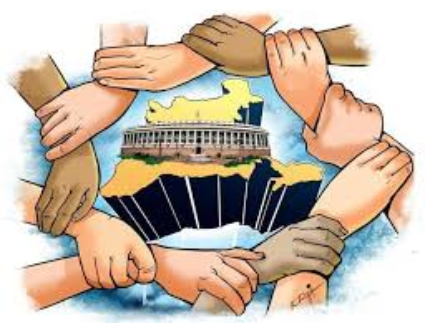 Part 11 of the Indian constitution that on January 26 1950 came to force defines the power distribution between the central or federal government and its State governments. In federal system national and states government work together to put in to effect and enforce law and punish law breakers. Federalism in India has a strong preference towards the central Government. Some unique features of federalism in India are:

Ø Indian State representation in the Parliament (Lok Sabha) is widely deferent from one state to another and it depends on a number of factors, including demography and total land area.

Ø The consent of a state is not required by the Parliament to alter its boundaries.

Ø No state, except Jammu and Kashmir, can draw its own Constitution.

Ø No state has the right to secede.

Ø No division of public services.

The Union and states have independent executive staffs fully controlled by respected governments and executive power of the states and the Centre are extended on issues they are empowered to legislate.

According to the Article 356 of the Constitution of India, states must exercise their executive power in agreement with the laws made by the Central government.

Article 357 calls upon every state not to impede on the executive power of the Union within the states.

Articles 352 to 360 contain provisions which empower the Centre to take over the executive of the states on issues of national security or on the breakdown of constitutional machinery.

Governors are appointed by the Central government to oversee states. The president can dissolve the state assembly under the recommendation of the council of ministers by invoking Article 356 if and when states fail to comply with directives given by the Centre.

State list consists of 61 items (previously 66 items). Uniformity is desirable but not essential on items in this list: maintaining law and order, police forces, healthcare, transport, land policies, electricity in state, village administration, etc. the state legislature has exclusive power to make laws on these subjects. But in certain circumstances, the parliament can also make laws on subjects mentioned in the State list.

Though states have exclusive powers to legislate with regards to items on the State list, articles 249, 250, 252, and 253 state situations in which the federal government can legislate on these items.

v  Because every states has a copy of national government so it make a suitable situation to serve as training grounds for national politicians and as laboratories in which new ideas can be tested.

Disadvantage and arguments against Federal system:

v Some see expansion of national powers as a danger

v Provide for the public welfare

Politic and Governing in India
by: Dr. Mandana Tesheyar